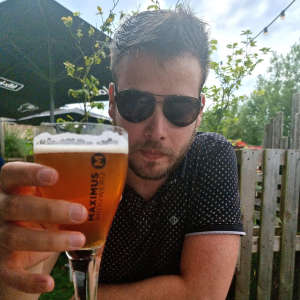 Ryan Twitter Untappd Ryan is a true newb in home brewing but got infected by the brewing virus. He loves IPA's and Rusian Imperial Stouts.

Hellow Brew! Welcome to the Brew Newb, a personal blog to keep track of the brewing recipes. So let's first start to share some background information on why the hop I'm doing this.

Like many, I got infected with the brewing virus by my wife, who gave me a homebrew starting kit. While postponing the brew due to the impressive list of brew steps I finally dared to get started and found it very fun to do! My first brew was two years ago, brewing a basic IPA from the Brouwbroeders (BrewBrothers).

As my wife kept me motivated by rating it 5.0 on Untappd, which was basically for the effort, as the outcome had no body and we think no alcohol, probably caused by doing a step wrong in the entire process. But based on this initial experience I have learned a lot and purchased another brewing kit to see if I can do it better.

Now 5 brews further I decided to purchase an automatic brewing kettle and start brewing based on recipes from others to take the brewing to a next level.

At this moment I don’t have any serious ambition with brewing, I just very enjoy the process of making it. Now my goal, for now, is to get better and make nice beers based on the created recipes. Eventually, I want to experiment created my recipes when I got the hang of it. One of the brewing dreams I have is to create a barrel-aged beer, but that is something for later.

Now I don’t have any direct ambitions to compete in competitions, maybe in a couple of years when I’m not a newb anymore.

Now as I’m moving to recipes from others, I want to keep my progress of brewing but also store what I have done with each brew. Now the idea is on each brew, to document the source of the recipe used, sized to the batch I want to make, and document in detail all the steps. At the end I will include the final result and if needed some ideas on how to improve it.

Now as I’m a person that invests a lot of time in the tech community for my work, so based on that I have decided to do this publicly in a blog format. Now I primarily do this for my self and maybe others find it useful as well.

If you have any tips and tricks for me, please let me in the comments below.

Photo by Yasin Arıbuğa on Unsplash